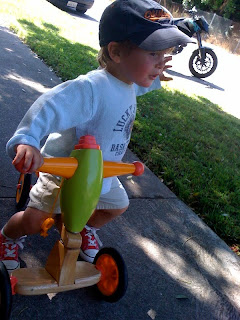 A few months ago my son started calling me "Arianna". It was clear as day. Not an easy name for most to pronounce, certainly not for one of 16 months, but nevertheless, he walked around for several days calling me by name.

I have to be honest and say that it didn't sit well with me. I wasn't a fan and didn't think it was cute at all! I think he knew it pushed a button. Why was it a trigger for me, I'm not sure? It's not like I don't like my name. I actually do! I think it was just a bit unsettling. I didn't wait 37 years to be a mom, to then be called by my given name. I never called my parents by their first names, so I never thought my 16 month old would call me by mine. Perhaps it was a flash-forward 16 years?

A few days later, he decided he would call his dad, Brooke. I thought for a minute he was walking around the house asking for a "book." But, two things about Braden; for one, his pronunciation is perfectly clear and secondly, if not, he doesn't relent until you understand him. So when I asked, "Are you looking for a book?" he replied, "No. Brooke" with his hands up in the air as if the say, "Where is he?" I then repeated, "Book?" and he repeated, "No. Brooke." I then asked, "Are you looking for Daddy?" To which he replied, "Ah-ha. Brooke."

I guess that made me feel a little better. :)

Fast forward to last week and suddenly I hear my now 19 month old say, "More animal crackers, Honey." And when he's really desperate, I hear him say "honey" with such a plea. I guess honey sounds better than calling me by name, but where does he get this?

And then I hear myself speak and it's clear where he gets it from. At least he's catching on to terms of endearment and not my, let's call it "assertive" demeanor while driving or speaking to Time Warner Customer service.

I guess it could be worse?!

What are some of the funniest or cutest things your child(ren) have said to you?