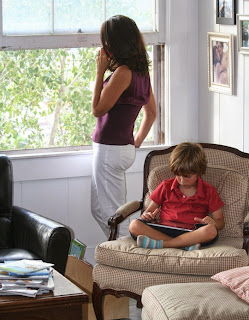 I don’t know about any one else, but I remember before having my son, I thought I knew everything there was to know about parenting.  I was, after all, a teacher.  I had a degree in early childhood education, had been a Nanny, and had worked with children since the time I was fifteen years old.  I even dated a few guys that acted a bit like children.  I was good with kids.  People always marveled at how well I understood them, how patient I was, and how children were drawn to me.
During the early months of pregnancy, my husband and I did our due diligence and talked about how we were going to raise our son.  What we would and wouldn’t do, what kind of parents we would and wouldn’t be.   We had it all figured out, and were sure we were going to be the best parents ever.
Have you ever judged other parents before you had kids of your own?  Not necessarily to their faces; but did you ever give a look, or think to yourself that you would never?  I would never let my baby sleep in bed with me; drink formula or eat anything that wasn’t organic.  I would never let my child throw a temper tantrum in the middle of a toy store; never bribe him with candy; and never put him in front of the television so I could have just 10 minutes of peace.  I would never allow my teenager to talk back to me, get a tattoo or nose ring, and so on, and so forth.
Until…
You had children of your own and you realized just how hard parenting is; the lack of sleep, intimacy with your spouse, and balancing act of it all.  You forgo the homemade pasta with pesto made from the garden, for the boxed Annie’s Macaroni and Cheese.  You give into co-sleeping because you are just too tired to get up for the fifth time in less than two hours.  You hand over the iPad because you want just 10 minutes to finish a conversation with a friend you haven’t been able to talk to in over 6 months.
You just do the best that you can and most of all, you stop judging and begin to understand: the mother who hasn’t slept in three days because her daughter has strep throat and gets ice cream for breakfast because that’s all she’ll eat; or, the mother who’s juggling three babies under the age of four, trying to pay for groceries while her boys are running around the store like wild things; and, the mother who’s child drops his only cookie in the sandbox, so she swiftly picks it, shakes off the sand, and hands it right back to him thinking, “ a little sand never hurt anyone.”
Because as a parent, I know that nobody is perfect.  I’m not.
What are your less than perfect parenting confessions?
---