The Evolution of Craigslist.

I have probably used Craigslist since it's conception.  What an amazing idea.  A community of resources, an ability to buy and sell items for FREE!  Thank you, Craig for your invaluable list.

I first started using Craigslist to find work and actually found several jobs through it's postings back when I was working in child care.

I then used the list to find apartments and eventually sold things, mostly furniture; especially when I moved from state to state. 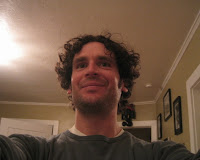 To many people's surprise, I met my husband on Craiglist.  Yes, it's true.  I was encouraged from a friend who met his then girlfriend, and eventually wife, on the site.  I had tried other online dating, but was getting frustrated and had pretty much given up.  On a whim,  I decided to try it out.  It was free after all, so what did I have to lose? The first time I posted was a disaster, and I'll save you the gory details.  It wasn't until 6 months later, when I decided to try again, that I met Brooke.  It was a Saturday afternoon.  Memorial Day Weekend to be exact.  I posted (on the left, is the photo I used), and Brooke responded less than 20 minutes later.  He seemed sweet, thoughtful, and he had clearly read my post.  His photo (see above) wasn't half bad, either: I was drawn to him.  We emailed back and forth a few times, we spoke the next day and met the following.  Memorial Day!  It all happened so quickly, but we obviously know how it turned out.   Who would have thought?

We have since used Craigslist to sell our furniture when my husband and I moved in together, found new jobs and recently have bought and sold baby items and clothes.

In this day and age, when money is tight for many of us, and we try to leave minimal foot prints on the earth, what better site than Craigslist.  There have been knock offs, but nothing beats the original.

So before you go out and buy something new, or simply toss out something you don't need anymore, think of the earth, your kids and grandkids that will use it, and try Craigslist.  You have nothing to lose.

So, if anyone knows or has the chance to meet Craig, please tell him I think his list ROCKS and that I say, "Hi!"