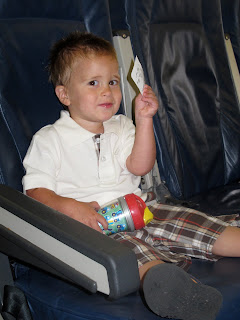 If you've ever flown with a baby or young toddler, you know "the look" I'm talking about.

No one actually says anything: well that's not totally true, I do have a friend who had a passenger make a real fuss and ask to be moved when he knew he'd be sitting next to a baby.

But, for the most part, it's just a look.  A look that says so much without a word.  If there were one of those cartoon bubbles above their heads, it would read, "Oh NO! Please don't sit next to me.  Please....  Oh dear, they're getting closer... Keep walking.  Keep walking.  Keep waaaaaaaalking... GREAT, you're not in my row."

I'm the kind of person that likes to mess around with those same passengers.  I either pause in front of their row as if to say, "Is this it?" Or better yet, I'll actually drop my stuff off in the seat next to them only to reposition myself and say, "Phew, I needed to put that bag down for a second before I kept walking. Have a great flight."

Why is it that people always assume flying with kids means chaos?

Have you ever been on a flight where a child caused you to wish you weren't on board?  Sure, I've had crying babies, screaming children and even that kid who sat behind me and kicked the back of my seat for the better part of the trip, but it's never caused me absolute discomfort.

Is it lack of patience?  A dislike for children? Ignorance?  I have often wondered.

In Braden's short life he has flown on 14 airplanes and never once caused a ruckus.  Most times people don't even realize, until after the flight, that he was even there.

On our last flight I has several passengers, including flight attendances, marvel over how well behaved he was, as if they didn't expect that.

I, as his mother, not only expected he would be, but also knew it.  Sure, he has his "moments," but in general, we raise him to be polite, respectful, well mannered and behaved.  Why would flying in an airplane be any different?

What I would ask those who travel and have given "the look" would be, to try and be patient, to be kind, and to get over it!  Sometimes, no matter how much a parent wants their child to behave, for whatever reason (they skipped a nap, they're teething, they're hungry, their ears hurt, they're jet-lagged or tired, etc...) they just might not be in the mood.  It happens to even the best of babies.  After all, they're babies.